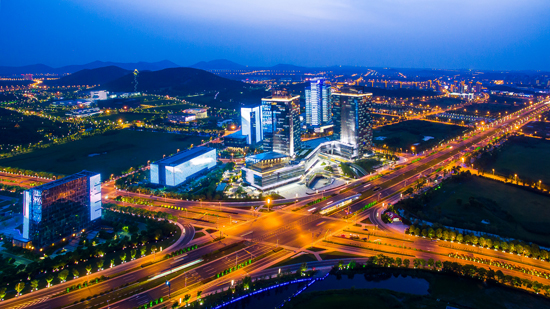 Getting to Suzhou in Jiangsu province is a breeze. Simply choose your airline, airport, train or shuttle, and you’ll be there in no time.

Shanghai Hongqiao International Airport (SHA) is one of two airports in Shanghai. After landing at SHA, visitors can make a short trip to Suzhou by train, shuttle bus or taxi. Because of the short distance to Suzhou and easily accessible train transportation, travelers to Suzhou usually choose to fly to SHA.

Pudong International Airport (PVG) is the largest airport in Shanghai. Located in the Pudong New Area, the airport is a fast-growing hub. Trains, shuttle buses and taxis are good transport choices for visitors after landing at PVG.

Sunan Shuofang International Airport (WUX) is the closest airport to Suzhou. While many travelers are enticed by its proximity to the oriental water city, the airport is relatively small and there are no nonstop flights from the U.S. or Canada into WUX, so travelers inevitably transfer in another city before making the final leg of their journey.

Two additional airports — Hangzhou Xiaoshan International Airport (HGH) and Nanjing Lukou International Airport (NKG) — are also available and frequently used by travelers visiting Suzhou. The distance from each airport to Suzhou is roughly 100 to 125 miles (164 to 203 km), about a two to two-and-a-half-hour’s drive.

Airlines from the U.S. or Canada to Shanghai (SHA or PVG) nonstop include:

After arriving at a nearby airport, the quickest way to get to Suzhou is by train. Suzhou has four main railway stations. Fares vary for each destination. Visitors can purchase their tickets from the railway station counter, through the ticket office at the airport or via the 12306 APP.

Making your way to Suzhou by bus, coach or shuttle is also a good choice. Suzhou’s three main bus terminals are located throughout the city and provide daily transport to and from surrounding airports.

It’s the largest of the three stations and is located in the southern part of downtown Suzhou.
Location: East of Yingchun Road and Nanhuan Road, Suzhou
Destinations: Shanghai, Nanjing, Hangzhou

Suzhou North Coach Station
It’s the newest of the three stations and is located next to the Suzhou North Railway Station, about a 30-minutes’ walk from downtown Suzhou. The express buses from Wuxi and Shanghai are convenient for quick trips from WUX and SHA to Suzhou.

Suzhou West Coach Station
Due to its location, north of the Suzhou Amusement Park along the edge of Suzhou New District, this station is the furthest from downtown Suzhou. Express service is available to and from some locations — including Shanghai.
Location: Jinshan Road and Changjiang Road, Suzhou New District
Destinations: Changshu, Zhangjiagang, Kunshan, Zhenhu, Nantong, Wuxi, Liyang, Hangzhou and Nanxun