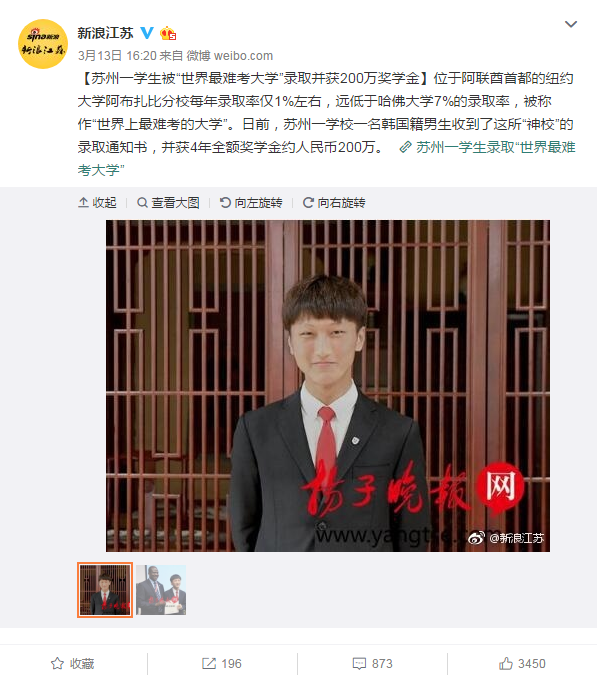 A student studying in China was admitted to the New York University Abu Dhabi, known as one of the world's most selective undergraduate universities, and won the 4-year full scholarship, about 2 million yuan.

Kim Min-woo, from South Korea, moved to China with his parents two months after his birth. He grew up in Suzhou, East China's Jiangsu province, where he studies at an international high school.

The annual admission rate of the NYU Abu Dhabi is only about 1 percent since it opened in 2010, far lower than Harvard University's 7 percent.

"Maybe my diversified thoughts and unique perspective on economics attracted the examiner," He said. Kim fluent in Chinese, Korean and English, also has deep insight into the three different cultures. "I try to think from different cultural backgrounds and global perspectives." he said.

"I read many books on economics in high school and decided to study it in the university." Kim chose economics, physics and chemistry in high school, and was admitted to his favorite subject economics by NYU Abu Dhabi.

The international high school helped him practice his English and self-studying abilities according to Kim. He pass the second level of Test of Economic Sense and Thinking (TESAT), a Korean qualification test in economics, and scored 115 in TOEFL, 1,470 in SAT and all A*s (except an A in Chinese) in IGCSE.

"The university has a small and diverse student body from over 70 countries," he said. For Kim, NYU Abu Dhabi was a challenge. However, the interview was not hard, he said. "I visited the school, talked with the professors and students and joined the dinner party on the first day. Then on the second day, first it was a 15 minute one-on-one interview with the professor who asked ideas about the major. Following was a one-on-three interview with the admission officers, asking your ideas about the school," Kim said.

During the high school, Kim also attended a lot of practical activities, for example, he was a student journalist of a Korean newspaper based in Suzhou, he founded a Korean culture club in school, and he also joined in charity activities to remote areas in western China and Philippines.