With the north steaming and the south boiling, China is in the middle of an intense heatwave. However, there is respite for the residents of Suzhou, who have a range of refreshing and splashy-splashy options for them to cool off. 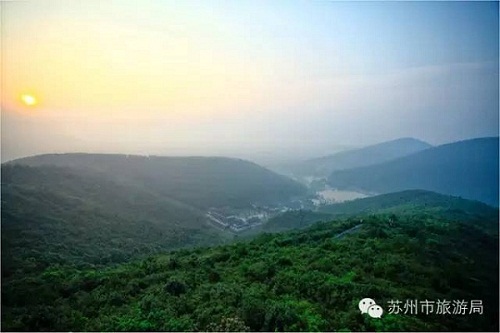 The Dome Mountain is bathed in the morning twilight. [Photo/WeChat account: suzhouvisit]

As the most serene and primitive cove in the western suburbs of Suzhou, the Thatched Cove, situated in Dome Mountain famous for its rich natural resources, is always about 4 degrees cooler than the outside temperature.

The cove resonates the sound of birds twittering and brooks babbling as you walk along footpaths lined with verdant bamboo, enjoying the tranquil atmosphere and fresh air.

The Thatched Cove is a nature plant museum with many valuable trees and herbs. It boasts clean air with ample negative ions and abundant oxygen.