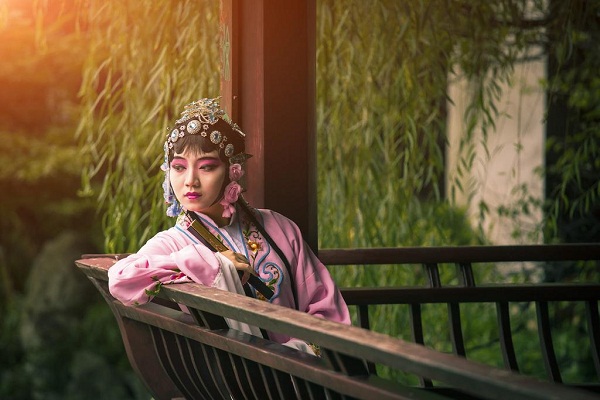 Kunqu opera, also known as Kunju or Kunshanqiang, is one of the oldest forms of folk operas in China.

The origin of Kunqu opera started from Guan Yunshi, an official of the Yuan Dynasty (1271-1368), who was of the Mongolian ethnic group. He admired traditional Chinese culture and thus resigned his job to live as a hermit in South China. Guan was good at creating sanqu, a type of verse with tonal patterns modeled on tunes drawn from folk music. His works passed down and became the predecessors of Kunqu opera.

Kunqu opera reached its height during the Ming Dynasty (1368-1644). It integrated elements of singing, reciting, performance, dancing and martial arts, and was usually performed to the accompaniment of flute and sanxian, a three-stringed plucked instrument. Its quiet melodious singing and magnificent costumes and accessories won it the title of “Ancestor of All Operas”.