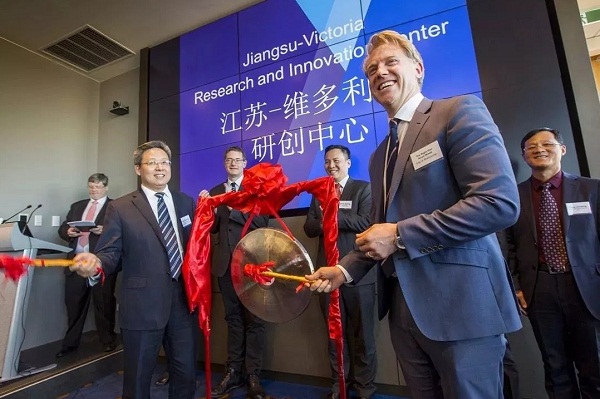 Officials and business representatives celebrate the signing of cooperation agreements at a promotional event for Suzhou New District in Melbourne, Australia on Sept 24. [Photo provided to chinadaily.com.cn]

Suzhou New District attracted 15.38 billion yuan ($2.15 billion) in investment between January and September, fulfilling 86.8 percent of its annual goal for the year.

The actual use of foreign investment reached $530 million yuan during the same period, exceeding the annual target by 21.9 percent.

Construction on 24 key projects with a total investment of 115.4 billion yuan has also started.

The projects include a new generation information technology industrial park worth 6 billion yuan, a listed companies’ headquarters cluster covering about 20 hectares, and the Suzhou branch of Nanjing University, which is expected to enroll 20,000 students upon completion.

A manufacturing plant for communication base station equipment with an investment of 1 billion yuan is also under construction. The plant will produce five million units of equipment annually after starting operations. Its annual output value is expected to top 2 billion yuan.