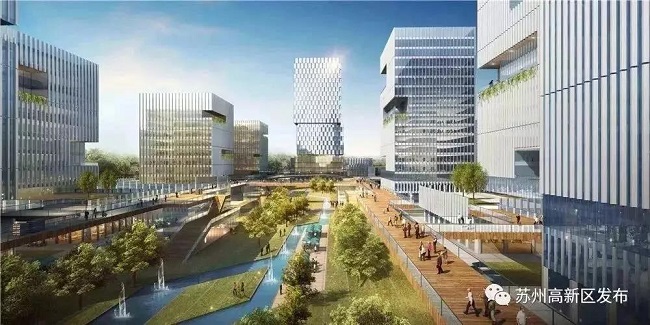 Suzhou New District is currently home to 23 municipal-level headquarters economy companies, which is why the district has decided to construct an industrial community for local headquarters.

With an investment of six billion yuan ($844.35 million), the industrial community will include nearly 60 headquarters in its 305-mu (20.33 hectares) area.

Companies which locate their headquarters in SND will receive a one-off subsidy of two million yuan as well as up to three billion yuan worth of interest subsidies of loans.

Three new companies have decided to open headquarters in SND this year.

Alibaba Group invested $100 million to establish its Suzhou headquarters of Hema Fresh, Alibaba's fresh food chain supermarket, in SND. The regional headquarters will open 20 outlets in Suzhou in three to fives years and is in charge of their management, technological R&D, procurement and sales.

Suzhou Ante Cosmetics Co Ltd is expected to invest 350 million yuan ($49.46 million) to establish a headquarters in SND, including an office building, exhibition hall, R&D centers and production factories. After the project is put into operation, its total output is expected to reach five billion yuan within five years.