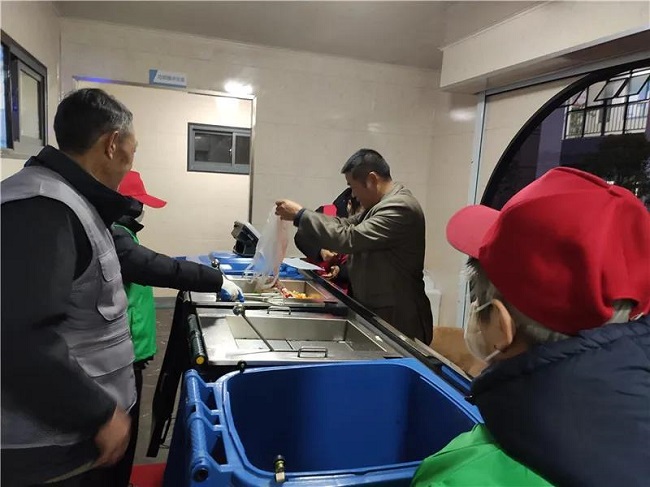 Residents of Fukang community dispose their garbage with the help of garbage sorting supervisors and volunteers. [Photo/WeChat account: snd-szgxqfb]

After a thorough investigation, the district has decided to establish garbage houses to replace scattered garbage cans and required local residents to take out their garbage at a fixed time.

The district categorizes household garbage into kitchen garbage, construction garbage, bulky garbage, and landscape garbage, each of which is expected to be transported in a different vehicle to a different treatment plant.

Each of the three household garbage treatment plants in the district are capable of treating 400 tons of garbage per day. Two of them will soon begin operating and one will start construction in June.

Eight kitchen garbage disposal stations with a daily capacity of 3.9 tons have also been introduced in rural areas, serving 72 villages.

In addition, another garbage disposal facility for bulky and landscape garbage will begin operating this year with a daily capacity of 50 tons.

Residents are required to deliver their garbage to the house between 6 am and 9 am or between 6 pm and 9 pm, and garbage sorting supervisors and volunteers will check whether they have properly sorted their garbage. If not, they will teach them how to sort it properly.

The garbage will then be transported to corresponding disposal plants twice a day, and kitchen garbage will be transformed into marsh gas and organic fertilizer.