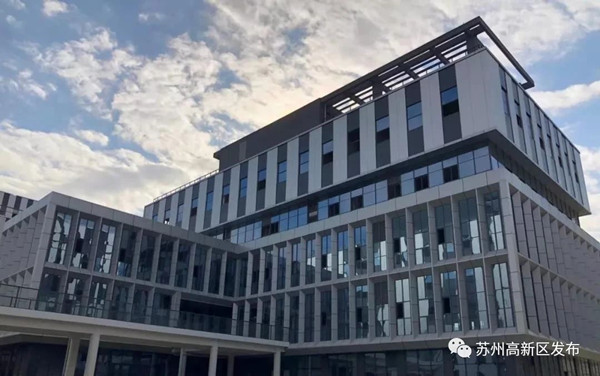 Suzhou aims to develop a 1-trillion-yuan ($141 billion) biomedical industry to ensure the city's steady development over the next 10 or 20 years or even longer. [Photo from WeChat account snd-szgxqfb]

A conference on the development of Suzhou's biomedical industry began on April 25 in Suzhou, East China's Jiangsu province.

Lan Shaomin, Party secretary of Suzhou, addressed the event, saying that the world is making quick scientific and technological progress and reforming industries, and biomedicine offers Suzhou a chance to stay ahead of the curve. As the biomedical industry develops globally, Suzhou hopes to develop a 1-trillion-yuan ($141 billion) biomedical industry, which will help the city develop sustainably for the next 10 or 20 years, or even longer.

Lan said that by 2022, Suzhou is expected to be home to 4,000 biopharmaceutical companies with an industrial output value of over 280 billion yuan. By 2025, the city aims to be home to 6,000 such companies with a combined industrial value of more than 400 billion yuan. The ultimate goal of developing a 1-trillion-yuan biomedical industry is expected to be achieved by 2030, when it is hoped that more than 10,000 biomedical companies in Suzhou will be generating a year-on-year growth of over 20 percent in the industry.

Mao Wei, head of Suzhou New District (SND), said the district will offer support to Suzhou and work to strengthen its medical equipment industry. It has rolled out a 10-year development plan for the industry and will strive to generate an output value of 50 billion yuan by 2022, a figure that is expected to quadruple by 2030.

Sixteen major biomedical enterprises were announced at the conference. Suzhou Tianling Chinese Medicine Decoction Co and Suzhou Hybiome Biomedical Engineering Co, two companies based in SND, were on the list.

In addition, a group of biomedical companies, industrial parks, hospitals, and financial institutions signed cooperation agreements with the local government.

In recent years, SND has emphasized its supportive role in Suzhou's biomedical industry and formed a subdivided industrial cluster focusing on medical imaging, in-vitro diagnosis, biomedical materials, implantable intervention equipment, and diagnostic equipment. It has also formed a group of scientific research institutions, including the Suzhou Medical Institute of the Chinese Academy of Sciences and the Suzhou Medical Device Research Institute of Southeast University. In addition, it is now home to professional carriers such as Jiangsu Medpark and Inspirationpark.