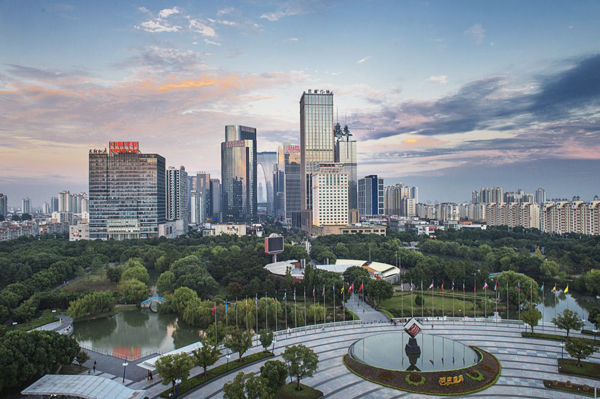 Suzhou New District (SND) is located in the west of Suzhou, Jiangsu province, with Taihu Lake to the west and the 2,500-year-old core of the city to the east. It was one of the first national high-tech zones, and, in addition to high technology, is also known for its charming natural scenery and profound culture.

Topographically, SND is elevated in the west and depressed in the east. It has a subtropical monsoonal climate with distinct seasons and is mild and humid all year round. Its average temperature is around 17.7 C.

The district enjoys convenient transport links, being 90 km from Shanghai Hongqiao International Airport, 130 km from Pudong International Airport, 100 km from Shanghai Port, 90 km from Zhangjiagang Port, 70 km from Taicang Port and 60 km from Changshu Port. Besides, a string of traffic channels, including the Huning (Shanghai-Nanjing) highway, State Road 312, the Suzhou round-the-city expressway, the Jinghu (Beijing-Shanghai) railway and the Beijing-Hangzhou Grand Canal, run across the district.

SND, the former Hexi new district, had no independent administrative area before February 1992. The district has administered six villages on behalf of Hengtang town since March 1992. It covers 6.8 sq km, stretching from the Grand Canal in the east to the Shizi and Heshan mountains in the west, and running from Xiangyang River in the south to Fengqiao town in the north.

In November 1992, the district was approved by the State Council as a national high-tech industrial development zone. It was officially named Suzhou New District in 2002.

The district has witnessed soaring development, becoming the key driving force of Suzhou's economic growth, a demonstration area for self-innovation, an industrial base for high technologies, and one of the most prosperous commercial areas in the city.

Furthermore, SND has rolled out a series of policies concerning talent and technology, attracting more than 229,000 talents, with the number of sci-tech leading talents and teams amounting to 1,000. The district has now gathered 522 high-tech enterprises, 92 gazelle companies and 16 listed companies. Its investment in R&D accounted for more than 3.5 percent of the GDP.

SND has striven to optimize urban functions, by pushing forward construction of infrastructure such as subway lines 3 and 5, renovation of Shishan Road, planning of a culture square and a scenery belt along the canal. The district is now collecting design plans from around the world for the Dongwu Museum, Suzhou Science and Technology Museum and an art theatre.

SND has also made continuous efforts in civilized city construction, selecting morality models, building up a bigger volunteer team, and strengthening environmental and traffic improvements. The Shushan village in the district has won the title of "National Civilized Village."