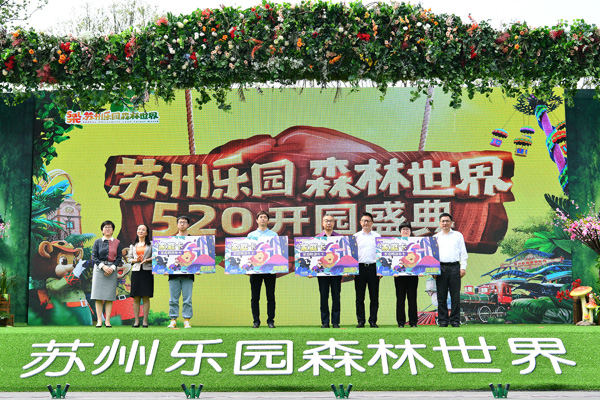 The much-anticipated Forest Park, which has been being developed by the local decades-old entertainment brand Suzhou Amusement Land for the past four years, received its first visitors on May 20.

The park is located near Dayang Mountain and 40 percent of its area is covered by trees and plants. It is expected to become the top forest resort in the region, and maybe even the entire country.

The park offers gardening activities, performances, catering, shopping, and other forms of recreation and aims to attract visitors of all ages. Visitors can ride a train around the park, meet some cartoon characters, wander through a rainforest and cherry blossoms, create artwork, or have an adventure on the "snow-covered plateau".

The opening ceremony saw medical workers from Suzhou New District being awarded annual passes to the park in honor of their efforts in the fight against COVID-19. Eight local families, selected from a pool of around 1,000 candidates, shared their Suzhou Amusement Land memories, as the company has been operating in the area for generations. May 20 was also designated as the park's annual public welfare day.

Suzhou Amusement Land has seen a lot of development in recent years, moving from its original location at Shizi Mountain to Dayang Mountain, and developing from a simple park to a forest-themed entertainment resort.