First group of Koreans returns to work in Suzhou since epidemic 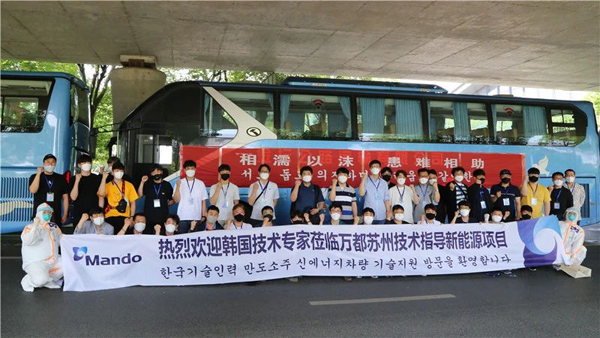 Experts from South Korea take a chartered flight to get back to work in Suzhou New District June 5. [Photo from WeChat account snd-szgxqfb]

Foreign enterprises in Suzhou New District (SND) are speeding up efforts to shuttle their employees back to China and get businesses back on track, local media reported June 8.

Mando, a chassis and components subsidiary of its South Korean parent company, boarded 35 employees on a chartered flight back to China June 5. It was the first group of Korean employees to get back to Suzhou since the COVID-19 outbreak started in January.

The employees will offer technical support to Mando's new energy project, which has been held up for four months by the pandemic. As scheduled, the project will be put into use July 12 and is expected to manufacture 360,000 steering engines a year.

After officers from the SND commercial department learned of Mando's talent needs, it took them only two months to help the company report visa affairs to the Chinese embassy in South Korea, ask the Suzhou government for entry permits and to charter flights, work with the neighboring Changzhou government to issue inbound permits, and arrange temporary accommodation and nucleic acid testing for the foreigners.

A flight shuttling German employees from four enterprises in SND landed in Shanghai the same day. They also went through medical observation and will return to work once their nucleic acid tests prove negative.

Enterprises funded by Japan, the United States and Europe are also speeding up applications for fast passes to get their employees back to China.