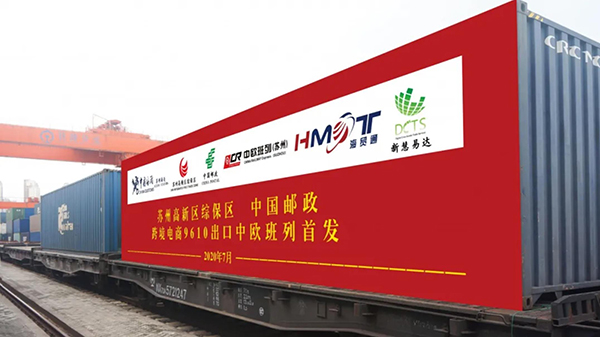 This is the first time Suzhou has sent a freight train filled with cross-border e-commerce goods, and it will travel around 13,000 kilometers over the course of 20 days, passing through Manzhouli in North China's Inner Mongolia autonomous region and over 20 European countries including Italy, France, Spain, the Netherlands, Belgium, the United Kingdom, Ukraine, Belarus, Sweden, Norway, the Czech Republic, Germany, Switzerland, Poland, Austria, Denmark, Slovakia, Ireland, Lithuania, Hungary, and Latvia.

According to Suzhou customs, the freight train is meant to help Suzhou explore new business opportunities with European countries and will serve as a model for local cross-border e-commerce companies.

In recent years, the China-Europe freight train service has spread from Suzhou to other areas of Jiangsu.

The Manzhouli Railway Port, which has the largest transportation volume among all land ports in China, serves as a bridge between China and Europe and plays a significant role in connecting nations involved in the Belt and Road Initiative.