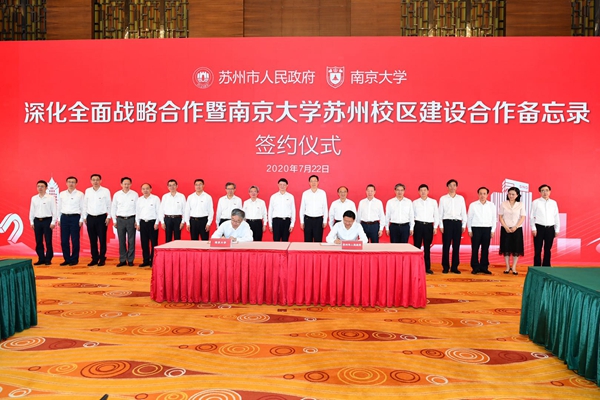 The Suzhou municipal government and Nanjing University sign a cooperation agreement to build the Suzhou campus on July 22. [Photo provided to chinadaily.com.cn]

Nanjing University, one of the oldest and most prestigious universities in China, is speeding up efforts to build its new campus in Suzhou, Jiangsu province.

The university signed an agreement with the Suzhou municipal government on July 22 to deepen cooperation on construction of the campus in Suzhou New District after receiving official approval from the Ministry of Education on June 23.

The two sides announced during the ceremony that the overall Suzhou campus, which consists of east and west sections, is expected to be put into use in September, 2023 and the east section will begin operating in September, 2022.

With a green hill in its center and Taihu Lake as its backdrop, the Suzhou campus will feature beautiful natural scenery and cover an area of 133 hectares.

It will include 10 schools focusing on fields such as biomedicine, new energy and materials, information technology, and finance and will be operated in accordance with academic standards for world-class universities.

Lan Shaomin, Party secretary of Suzhou, said the Suzhou campus is expected to help boost the development of higher education and scientific and technological innovation in the city.

When looking to the future of the Suzhou campus, Hu Jinbo, Party secretary of Nanjing University, said it will play an important role in promoting education reform and high-end international cooperation for the university.

More flexible systems relating to teaching, scientific research and management will be used in the campus, which may provide solutions to higher education reform in China, according to Lyu Jian, president of Nanjing University.