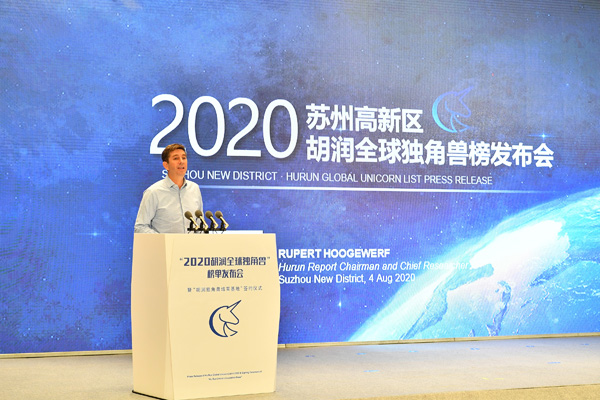 The 2020 Hurun Global Unicorn List is released in Suzhou New District on Aug 4, engaging 586 unicorn companies from across 145 cities in 29 countries. [Photo provided to english.snd.gov.cn]

The companies on the list are start-ups established for no longer than 10 years. Though not listed on the market, the companies have gained private equity investment and had their values estimated at over $1 billion.

The agreement to set up a base focusing on the incubation of unicorn companies in SND was signed on the same day. The base will integrate closely with SND's emerging industries such as next-generation information and communication technology, medical apparatuses and biomedicines, and high-end equipment manufacturing.

Unicorn companies are widely recognized as a reflection of innovation capability and environment.

Since the district launched 36 preferential policies at the beginning of 2020, groups of talents have been attracted to work and live there, elevating the total talent pool to 260,000, with 36,000 being high-end talents.

In the first half of this year, the district realized regional GDP growth of 0.9 percent, the third-highest among counties and districts administered by Suzhou. Investment in fixed assets was up 11.7 percent to $27 billion, and foreign capital in actual use, which included Global 500 enterprises such as Thermo Fisher Scientific and Costco, reached $690 million.

"The release of the 2020 Hurun Global Unicorn List encouraged us to optimize our business environment to realize our goal of infusing vitality into SND's development and shaping it into a hub of unicorn companies," said an official from the district. 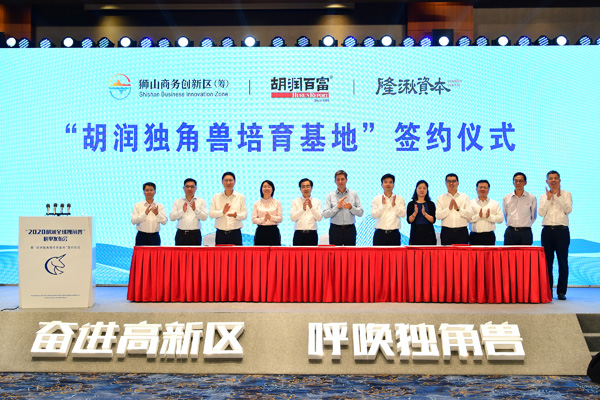 The agreement to set up a base focusing on the incubation of unicorn companies in Suzhou New District is inked on the same day. [Photo provided to english.snd.gov.cn]