The logo, a sketch depicting a classical Suzhou garden and a bridge standing over flowing streams, and the "Suzhou, China with Style" slogan are said to reflect the city's cultural image and confidence.

A total of 21 inbound travel routes – 12 for free independent travelers and 9 for group tours – which cover various cultural and sightseeing aspects of Suzhou will be offered to travelers. One of the routes features centuries-old historic sites while another is centered on folk artistic crafts.

After the launch ceremony, 100 foreigners from the United States, United Kingdom, France, Italy, Japan and Germany formed five groups to explore some of the routes.

Anna Miller, one of the foreign participants, said that Suzhou is a city of both classic and modern aspects that makes her want to learn more about its history and culture. 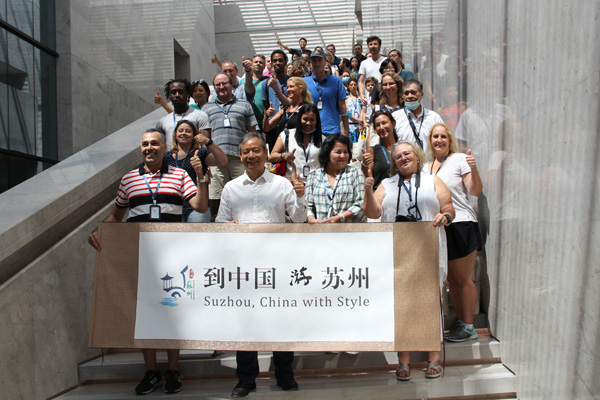 Foreigners pose for a group photo before embarking on a travel route in Suzhou, Jiangsu province, Sept 6. [Photo/WeChat account: suzhouvisit]