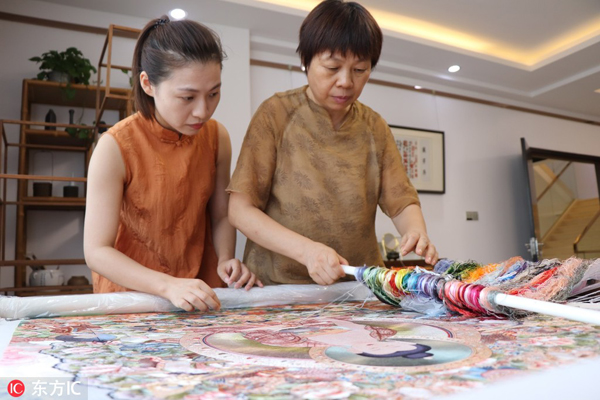 With a history of more than 3,000 years, Su embroidery is the general name for embroidery products in areas around Suzhou, Jiangsu province. The craft, which dates back to the Three Kingdoms Period (220-280), became a sideline of people in the Suzhou area during the Ming Dynasty (1368-1644). Well known for its smoothness and delicateness, Su embroidery won Suzhou the title City of Embroidery in the Qing Dynasty. In the mid and late Qing, Su embroidery experienced further developments involving works of double-sided embroidering. There were 65 embroidery stores in Suzhou City. During the Republic of China period (1912-1949), the Su embroidery industry was in decline due to frequent wars and it was restored and regenerated after the founding of new China. In 1950, the central government set up research centers for Su embroidery and launched training courses for the study of embroidery. Weaving methods have climbed from 18 to the present 40.

Su embroidery features a strong, folk flavor and its weaving techniques are characterized by the following: the product surface must be flat, the rim must be neat, the needle must be thin, the lines must be dense, the color must be harmonious and bright and the picture must be even. Su embroidery products fall into three major categories: costumes, decorations for halls and crafts for daily use, which integrate decorative and practical values. Double-sided embroidery is an excellent representative of Su embroidery.