Jiangsu on road to rural revitalization 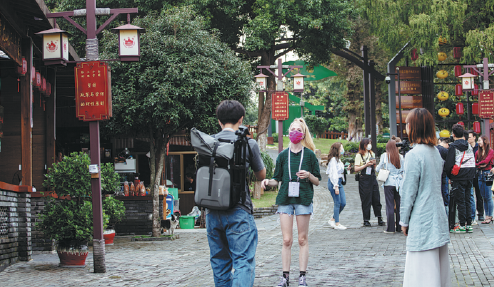 East China's Jiangsu province has made steady progress in revitalizing its countryside by implementing a series of successful rural projects aimed at bringing about more economic growth.

Jiangning district in the provincial capital of Nanjing is one such example of how rural revitalization has been a success.

In recent years, Jiangning has stepped up efforts in developing its 10 subdistricts to boost the rural economy, in response to the nation's effort to build a moderately prosperous society in all respects.

Huanglongxian Tea Culture Village in Jiangning is home to 173.33 hectares of tea plantations and has become a tourist destination.

In 2013, the Jiangning district government cooperated with local transportation and tourism companies to make the village an attraction focusing on tea culture.

The village of 134 people and 52 households predominantly run homestays for visitors.

Chen Yuanmei, 41, returned to the village and opened a homestay and restaurant with her husband in 2014.

"In the past, the village had poor transport links, and we had to become migrant workers to earn money to support the family," Chen said.

"But now it is easier to make money at home."

Chen's family of six all work in the homestay business.

The city of Suzhou is another example of where rural revitalization is taking place.

At present it has eight training courses with 280 participants.

Teng Liang, a local contractor, is attending a course on growing rice.

Teng said he has 8.67 hectares of farmland and expects to achieve an annual income of nearly 300,000 yuan.

"We hope to learn about automated planting technology and improve our planting skills in the face of increasing agricultural mechanization," he said.

The base has hired industry experts from institutes and universities to give lectures and practical instruction, and to explain supportive policies for trainees.

As of August, the base had conducted 36 training sessions and has granted 525 vocational certificates. It has organized six online and 26 offline career fairs, offering 8,602 jobs.

"Building a moderately prosperous society in an all-around way at a high level is a solemn commitment we have made to the people of the whole province," said Wu Zhenglong, governor of Jiangsu province.

He said Jiangsu will focus on more balanced and comprehensive development, to effectively improve livelihoods, especially for disadvantaged individuals.