SND home to over 600 Japanese companies 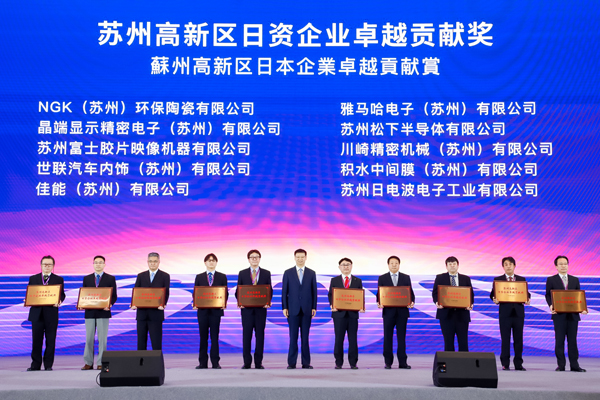 Suzhou New District saw the number of Japanese companies it was home to rise from zero to more than 600 over the past 27 years, local media outlets reported.

At the salon for Japanese investments on March 9, SND announced many impressive figures, which included settling 605 Japanese companies, with a total of $20 billion in investment, accounting for one third of the foreign-owned companies in the district. A total of 17 companies are ranked in the global top 500, including Panasonic, Canon, Epson, Fuji Film, Sumitomo Mitsui Banking, Fujitsu, Mitsubishi, Hitachi, and Yamaha.

The companies' industrial output value accounted for one fifth of SND's total, while their import and export volume exceeded one fourth of the district's total. There are about 40,000 employees working in these companies.

Zhu Huifang, an official of investment work in SND, said that she has been visiting companies and industrial parks in the district and couldn't be more familiar with their conditions.

Over the past 27 years, Suzhou NDK Co, the first Japanese company to settle in SND in January 1994, has increased its investment six times. Canon (Suzhou) Co, the 100th company that settled in SND, is about to welcome its 20th anniversary. Suzhou Yokohama Tire Co, the 300th company, has realized an average growth rate of 38 percent in its annual output value.

"SND has an open and friendly business environment. The local officials are familiar with our company's condition and they know what we need well," said Nobumitsu Fujiwara, president of Suzhou NDK Co.

With more Japanese people living and working in SND, the district rolled out a series of measures to increase their sense of belonging and happiness, which included setting up a Japanese school, bringing in Japanese banks, hospitals, and shopping malls, designing a Japanese-style commercial street, opening a branch investment office in Japan, as well as publishing monthly magazines for Japanese investors.

SND is planning to bring in more Japanese investments in life sciences, senior care, medical devices, securities and insurance, high-end equipment, as well as commerce and trade. It is determined to be home to 800 Japanese companies by 2022.

A total of 37 Japanese-funded projects, worth 10.8 billion yuan ($1.66 billion) in investment, were also signed on the same day of the salon.