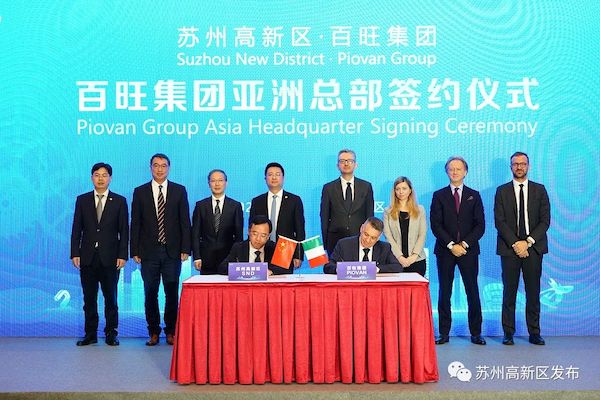 Piovan Group signs an agreement with Suzhou New District to establish its Asia headquarters in the district on July 15. [Photo/WeChat account: snd-szgxqfb]

Piovan Group, an Italy-based company supplying ancillary equipment and services in the plastic industry, signed an agreement on July 15 with Suzhou New District to establish its Asia headquarters in the district.

According to the agreement, Piovan Group's establishment of its Asia headquarters includes headquarters offices, new plants, as well as research and development institutes.

With the construction of the new plant, Piovan China will become the headquarters of all the company's branches in Asia. The new plant will also serve as an important R&D center for Piovan, developing all of the group's new technologies.

Headquartered in Santa Maria di Sala, Venice, Piovan Group is a global leader in the manufacturing of ancillary equipment for polymer conversion processing. The group established a production base in Suzhou in 2008 and began to produce its new equipment line Quantum in 2016.

Piovan Group is a world leading equipment manufacturer. The establishment of their Asia headquarters in SND will contribute to the development of the district's smart equipment factories, as well as help SND reach its goal of exceeding 120 billion yuan ($18.52 million) in production value, said Mao Wei, Party secretary of SND.